The bullroarer is an ancient ritual musical instrument dating back to the Paleolithic period.  One was found in Ukraine dating from 17,000 BC. It is found in Europe, Asia, the Indian sub-continent, Africa, the Americas, and Australia. In ancient Greece it was a sacred instrument used in the Dionysian Mysteries and is still used in rituals worldwide.  In parts of Scotland it was known as a "thunder-spell" for very obvious reasons when you compare its effects with those of the sound generated by thunder.  In Africa, the Dogon use bullroarers at the beginning of ceremonies conducted during the Sigui festival held every sixty years over a seven year period. They use it to summon the voice of their ancestors.  Almost all the Indian tribes in North America used bullroarers in religious and healing ceremonies.

The cord is given a slight initial twist, and the roarer is then swung in a large circle in a horizontal plane. The aerodynamics of the roarer will keep it spinning about its axis even after the initial twist has unwound. The cord winds fully first in one direction and then the other.

The sound it makes is key because it is a constant humming sound, but it is a pulsed sound – which as we have seen in the section on binaural beats produces far more effective spiritual experiences.  This characteristic roaring vibrato sound is derived from both the Doppler effect and the changing speed of the roarer at different parts of its circuit.  So you do need to know how to use it.

By modifying the expansiveness of its circuit and the speed given it, the modulation of the sound can be controlled. It is possible to generate extremely low frequency sounds that can travel extremely long distances, especially on the wind.  The average scientist thinks that aborigines use it for communication, like morse code, but then they would.  The inaudible low frequencies produced are absolutely ideal to induce a spiritual experience. 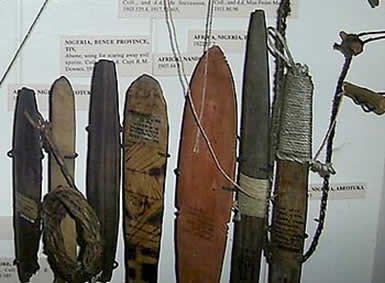