There are two types of technique that press the Roof of the Mouth  – tongue curling  is used in the more advanced yoga practises and  is called  Khechari Mudra; it is somewhat extreme in its methods.  Another less dramatic version is called Tongue pressing.  These days, most people within their yoga practise tend to use the latter technique. But they work in different ways.   Thus the one is not an alternative to the other.

In the Khechari mudra, as can be seen from the diagram, the tongue is rolled backwards and up.  It goes behind the soft palate [yes you are reading this correctly] so as to reach the base of the skull behind the posterior nasal openings.

The rolling of the tongue upwards and back-wards to reach the base of the skull, carries the superior surface of the tongue, with its end-organs of sensations away from influences outside.  So with this technique we have a partial form of sensory deprivation.

By positioning the tongue where it is, the nasal passages are also partially blocked so breathing  is also somewhat limited, meaning that we may also suffer a mild form of hypoxia.

The tongue is also nearly touching a key trigger point which lies just below the major organs of the head – pituitary gland, and hypothalamus – see Roof of mouth.

The Khechari-mudra is said to be ‘the king amongst the Mudras’ because it is so effective if mastered.  Here however, we have the million dollar problem.  It is insanely difficult to master.

To all outward appearance a Yogi practising this mudra appears to be dead and in this condition he can remain as long as he likes either buried under the earth or above it.

Now it must have occurred to most of you that this mudra is not possible to achieve unless you have a very long tongue. To roll the tongue so as to act as a block, it must be long enough to reach the root of the nose between the eyebrows.

In order to get the tongue long enough to perform this feat of engineering two approaches are used, one surgical and one involving exercises.

The surgical process is called Chedan and requires that you cut away very gradually at the band that holds the tongue to the base of the mouth. 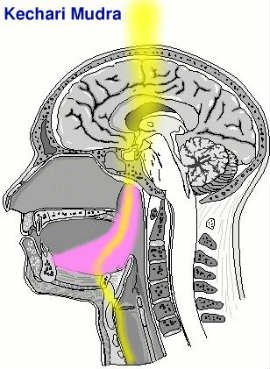 So now you can see why most people are content with just tongue pressing.