This technique uses trigger points and those to be found in the jaw. It works via nerve stimulation. 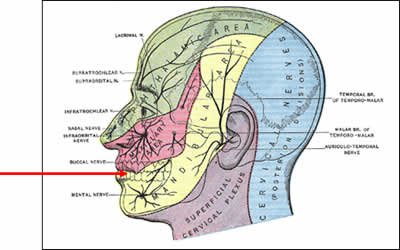 The nerves affected by the teeth chattering can be seen in this diagram.

All affect the trigeminal nerves.
Two sets of nerves are affected.

The mandibular nerve (V3) carries sensory information from the lower lip, the lower teeth and gums, the chin and jaw (except the angle of the jaw), parts of the external ear, and parts of the meninges.

The maxillary nerve (V2) carries sensory information from the lower eyelid and cheek, the nares and upper lip, the upper teeth and gums, the nasal mucosa, the palate and roof of the pharynx, the maxillary, ethmoid and sphenoid sinuses, and parts of the meninges.

This technique is one of many described in the book 'Zone therapy- Relieving pain at home' by Dr William Fitzgerald and Dr Edwin Bowers.  The book is, as one may guess from the title, about helping to heal people and relieve pain, but, methods that promote spiritual experience very often have their origins in methods for healing.

It was also used independently by Robert Monroe, who discovered it accidentally after having dental work.  There is possibly also an element of resonance and electrical stimulation produced by the metal in the fillings – if you have any  - giving off a tiny electric current which also affects the nerves.

“We have found it helpful, if the patient has a good set of teeth, to have him clench the teeth for several minutes at a time, over and over again.  This produces an exaggerated degree of relaxation, which is most helpful in overcoming nervous conditions”  And in fact, the same technique can be usefully used throughout the day to produce a generally relaxed state in which spiritual experience then become far more easily invoked at a later stage in the evening say.