A nod of the head is a gesture in which the head is tilted in alternating up and down arcs along the sagittal plane. Nodding is a repeated nod, lots of nods.

The head bobble, head wobble, or Indian head shake refers to a common gesture found in South Asian cultures, most notably in India. This form of nonverbal communication is sometimes referred to as "Indian head shake". The motion usually consists of a side-to-side tilting of the head in arcs along the coronal plane.

Socially both gestures are used to indicate agreement with what is being said by the speaker, such that the speaker perceives there is 'no problem' with the message currently being conveyed.  Simply put it means ‘yes’ or OK.

But both help in neck stimulation if  used for extensive periods of time [over 30 minutes]. 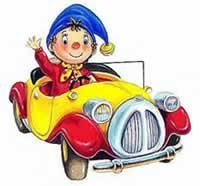 Enid Blyton had her own very profound spiritual experience under the influence of laughing gas. Perhaps she was trying to tell us something when she invented Noddy! [though I have been puzzling about Big Ears!!]

The bell would have helped too as it can be a source of infrasound or at the very least a befuddling mechanism.