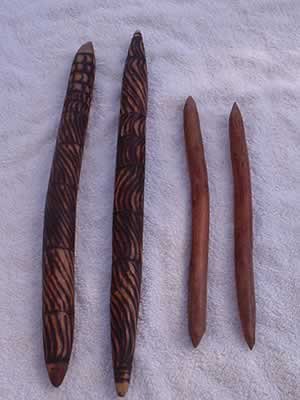 Clapsticks or clappers are a type of drumstick, or percussion mallet used to beat a rhythm. Unlike drumsticks, which are generally used to strike a drum, clapsticks are intended for striking one stick on another.

As an ancestral instrument that traditionally accompanies the didgeridoo, it is sometimes referred to as musicstick or just Stick. In the language of the Yolngu Aborigines of Northeast Arnhem Land, Australia these clapsticks are called bimli.

The vision of an aborigine shaman is no mere hallucination.  It is a mental formation visualised and externalised, which may even exist for a time independent of its creator… while the person is experiencing the vision, he cannot move, but he is conscious of what is going on around him.  As one shaman of the Kattang tribe NSW Australia told me… he could see and know what was happening, but was as one dead, feeling nothing.